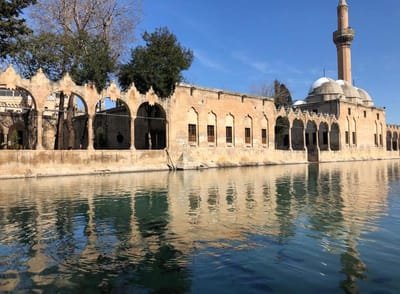 In Urfa there is so much to preserve! One of the oldest cities in the world, with hundreds of registered buildings, the architecture of the city speaks for itself. Our main aim is to help the restoration of this cultural heritage while encouraging the use of traditional materials in new constructions. The formation of a new generation of craftsmen who will produce adequate materials for the restorations such as carvers for the famous yellow Urfa stone is one of our primary goals.

The most important of our projects is the setting up of a workshop for forming the carving masters of the Urfa stone, a local material abundant in the region, used to construct majority of the old buildings. After the advent of the concrete, this material was set aside and the masters who transmitted this craftsmanship generation to generation simply get too old and unable to pass the hand to new apprentices.

Curiously enough, in Syria this craft is still practiced and new craftsmen formed from an early age in the workshops. As a natural consequence of the Syrian immigration to Turkey, many craftsmen who still practice this art live in Urfa region. We aim to organize a workshop to provide vocational training that will be open to the immigrant and local youth, vulnerable to economic uncertainty due to unusually high unemployment rates in this part of Turkey.

To learn a new craft translates to a new job and means more social cohesion between the two communities!